Published on January 4 2016
Posted by: Keat and Kyle
Segment: Everything Else
Tweet
You've seen us before, so now it's time to introduce our kitties! So without further ado ('cause we like soundin' fancy), here are the kitties that will be in our videos every so often.

Chi came to us as a kitten in 2009, and has been noisy ever since. As an Ocicat, she is a Abyssinian/Siamese mix with a bit of silver Tabby mixed in (we didn't make her like that, it's actually part of the species). Chi likes milk, turkey, and red laser dots.

Maru (named for the internet cat) is a tuxedo manx. He came to us in 2011 at a year old. After running off without his head (that's a story), he gained the nickname Derp, and acts derpy every day. Maru's hobbies include cardboard art, catnip, and napping in strange positions.

It is rumored that he has a secret spot that will cause him to lick uncontrollably. If you find it, let us know.

We're hoping that throughout our videos, the kitties won't be too distracting, but sometimes they just want to be part of the action.

On a more serious note, we would like to take the time to talk about another kitty that is close to our hearts: Niko. 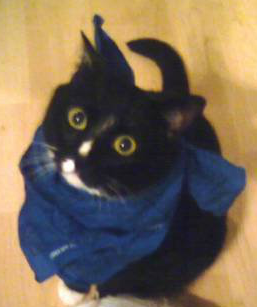 As the older brother to Chi and Maru, Niko was always a bundle of fun. We recently lost him to an unknown cause, but he is never forgotten. See Kyle's blog post for more details about Niko.

Niko's hobbies included catnip, playing with his catnip fish toy, catnip, chasing laser dots, tearing up scratching posts, and catnip. And snuggling. Did we mention catnip? He really liked that.

But enough with the sad music...

Our kitties are a big part of our lives, and for those of you that want to go to Japan and take their pets with them, we'll be covering the transportation process soon!
#chi #maru #cats #niko #derpy #red dot

How to make Rice Balls (Onigiri)

How to make Oyakodon

Snow Day, and Toad in the Hole Recipe

How to Reschedule a JPost Package

How to make Gyudon

Get to know the Japanobloggers: Kyle

How to make 3-color Soboro